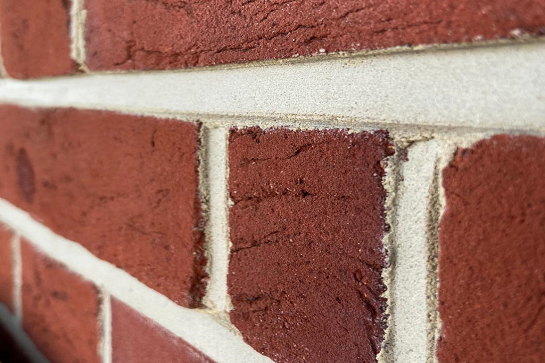 This traditional material is perfect for your delicate, period brickwork. Used for centuries, Lime Mortar ensures that your brickwork ‘breathes’ as it should do!

An incorrect usage of cement mortar on soft, period brickwork can cause damage to the bricks as you can see here on this Edwardian property.

Over time, the mortar joints between brickwork can break down and require repair. This is known as repointing. Exposure to the elements, and also the application of incorrect materials in previous work, can all result in the mortar failing, and exposing your property and brickwork to further damage and deterioration if not remedied.

When it comes to repointing brickwork, there are essentially two types of pointing commonly available; cement mortar repointing and Lime mortar repointing. Each of these substances work in very different ways, and it is important to understand when and how best to use each.

When working on historic buildings, constructed pre 1920, it is important to understand how they differ from their modern brick counterparts that came after this time. Historic brick is much softer than modern bricks, which can be fired and hardened at a much higher temperature these days than was possible in the past.

Importantly, older, historic buildings were actually designed to be permeable and were intended to absorb and release water, whereas modern brick building techniques focus on waterproofing. With this in mind, it is now important to clarify the differences between lime and the more common cement mortar.

Lime mortar is a simple mixture composed of lime, water and an aggregate such as sand. It was first thought to be used over 6000 years ago by the ancient Egyptians, who used it to lime-plaster the pyramids. Traditional lime mortar is intended to be porous, and breathable. When used on historic properties, or on softer materials such as stone or terracotta, lime mortar enables water to be wicked away/out of the brick/stone to the surface where it can evaporate. We offer expert, lime mortar repointing services that are in-keeping with the historic nature of your property.

Cement mortar however is very different. Originating during the 19th Century, cement mortar gained in popularity, gradually phasing out the use of Lime mortar as building methods changed and became more advanced, and using more durable bricks. Composed predominantly of Portland cement, lime, sand and water this new mixture was quick setting, inexpensive and strong. However it was also non porous, non breathable and inflexible.

And herein lies the problem. Too often, modern cement mortar is used incorrectly on older, historic property. Using such a non-breathable and inflexible material such as a cement mortar, when restoring and repointing older, historic brick buildings causes damaging issues.

As the older buildings want to naturally expand and contract with water intake, the non-porous and inflexible cement mortar does not wick the water away, meaning it instead exits through the historic brickwork. Over time, this results in a build up of pressure behind the brick face which eventually forces the front of the bricks to deteriorate and pop-off, leaving the interior of the brickwork open to further damage.

Traditional lime mortar combats this issue, by allowing water vapour to pass in and out of the joints, thus preventing water damage to the bricks themselves.

At Hampshire Repointing and Restoration, we are both lime and cement mortar repointing specialists and can ensure that the correct tools, techniques and materials are used on your property.